VoterScience QuickVote is an easy online voting/balloting tool that can be customized to support any election bylaws, such as fair voting, runoffs, multiple rounds of voting (where each round has different rules), majority/plurality, alternates, and arbitrary weighted systems.

QuickVote handles the balloting and works in conjunction with online conferencing systems such as Free Conference Call, Zoom, or Uber Conference.

You can see a demo at: https://www.youtube.com/watch?v=roGh5BG1bEE

Participants receive a link to the election and must sign in to authenticate themselves via their email.  Participants may have voting privileges or just be an observer/alternate, and the election admin can interactively promote them to voting status based on their credentialing process.

The election admin will see a real-time table of all users:

The “cast ballot” column allows show which individuals have returned a ballot so far (although the individual ballot is private). This can be used by the admin to ensure participants are successfully using the tool as well as when to move to the next round.

The admin can also paste a set of users in as a CSV.  This can be used to bulk-load 100s of users. The CSV includes headers for their email, Name, and whether they’re allowed to vote or not.

If email is blank, then a “fake” placeholder email will be generated from the name. However, this means that user will not be able to log in themselves and cast their own ballot. Instead, the admin will need to assign a proxy.

The admin can choose to assign a proxy for a user. This is useful if a user does not have access to the internet or if two people are sharing the same email address.

Proxies can be assigned in the following way:

Participants receive a link to the election, sign in, and are immediately presented with their ballot. They select their choices, click the big green “submit” button, and move to the next round.   The system will warn on undervotes and block them from overvotes.

If somebody does not have voting privileges, they get a warning and show up as a yellow row in the admin’s table of users: 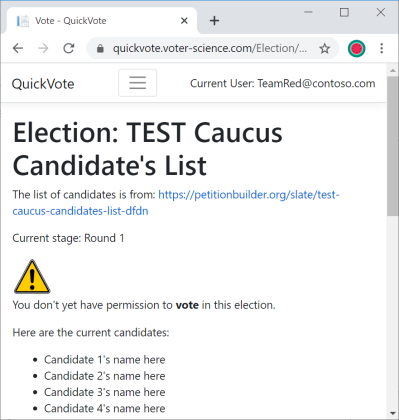 After each round of voting, all participants receiving the standings.

The election admin will see the ballots coming and can decide when to move to the next round.

Conventions often need to allow Yea/Nea votes from the floor of on proposed motions for Robert’s Rules of Order. QuickVote allows issuing a “quick poll” to support yea/nea votes from participants.  While the balloting is secret, the results of a quick poll are public.

The administration can pose a question:

And then the question will automatically show up on each user’s page:

The admin can call the poll after responses have come in and will see the totals and breakdown.

An election can have 1 or more stages, and each stage can 1 or more rounds of voting. The number of rounds are determined by that stage’s rule set.

Each stage has the following properties:

“What about people that don’t have an email address?”
The admin can assign anybody a proxy who can then cast the votes on their behalf. The proxy could be a staff member who is receiving the ballots out-of-band (such as over a phone call).
One person could be a proxy for multiple people.

“What about if multiple people (ie, husband and wife) share a single email address?”
One person in the couple will have the email address and login. Then they act as a proxy to cast votes for their spouse.  See Demo of Proxies on YouTube.

“We have 5 separate district elections, but they all have some county-wide votes. What do we do?”
You can setup a multi-stage election. Some stages are per-district, and other stages are at large.

An election could also have multiple admins, but they should be sure to coordinate with each other!

Your state party may already have an arrangement to use QuickVote.  For new customers outside of a state plan, the pricing is: