One of the most contentious elections in U.S. history is over and Donald J. Trump will be our next president.    Although Trump’s victory was moderately large in terms of the electoral vote, the closeness of the popular vote will prompt questions for Republicans moving forward, particularly in “blue” states such as Washington.  Just how did Trump do with Independent and soft Democrat voters in Washington state with whom Trump, though a polarizing figure, polled somewhat well since the early this year?

The question we wanted to answer was, “What exactly was the impact of Trump on Washington state races?”

Voter Science undertook a statistical modeling analysis of the early return data to assess Trump’s effect on local and statewide races.  We used data from ballot returns through Nov. 11th (with the understanding that final certified results will not be available for another several days).  Our statistical modeling utilized regression modeling using the form:

Legislative district race results were modeled using Trump/Pence performance and other factors as predictors.  Performance deltas to Romney/Ryan 2012 were factored in to determine the detriment or improvement a legislative candidate received this cycle, what we’re calling the Trump Effect.

In general, we found that the Trump Effect amplified pre-existing voter preferences, giving Republican candidates a lift in predominantly “red” areas while dragging them down in places that would otherwise have been more likely to be closely contested.

For state legislative candidates, the Trump Effect depended largely on where you were.

However, the Trump Effect was a net negative – “Trump Drag” – in many of Washington’s most populous counties, primarily those touching Interstate 5.  The Trump Drag was most evident in King County where the effect of the presidential ticket was to subtract an average of 5.2% from Republican legislative candidates. 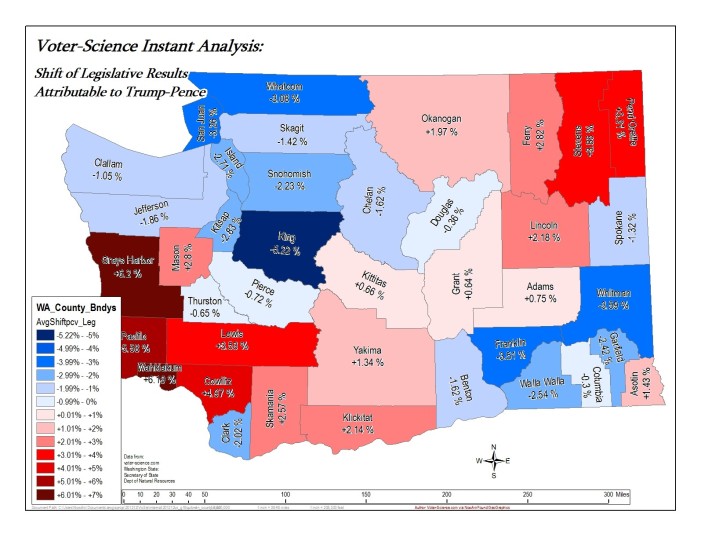 The impact on legislative races was stark in some cases:

As of 11/10/16, Republicans running in King County have racked up four losses.  Even in the deeply red 5th Legislative District, there was a point at which all three seats were at risk, and although the two state House positions are currently leaning R in terms of returns, and the state Senate race is currently a loss but trending toward a possible late Republican win, our modeling predicted the margin should have been decisive at this point where it not for Trump Drag.

The 30th LD, where the Republican party worked so hard in 2015, has seen two star incumbents removed.  State Senator Steve Litzow in the 41st ran to a tie in the primary but lost by more than five points in the general.  Again, our predictive modeling indicated that Litzow should won handily; Trump Drag pulled roughly 3,800 votes from the R column in that race.

Statewide Republican candidates suffered because of Trump Drag.  Overall losses to statewide candidates ran between 2 to 3 points and effectively made the races for Lands Commissioner and Auditor uncompetitive.  Were it not for the Trump Effect, both races would have been within 1 percentage points.

Depending on the race, the Trump Effect sliced off 50,000 to 70,000 votes from each of our key races.  Only Kim Wyman, the incumbent Secretary of State, fared better than the remaining slate of Republican candidates.

As with state legislative races, statewide candidates took the biggest hit in King County, a particularly rough Trump Effect because the county accounted for approximately two-thirds of the lost votes across all candidates. 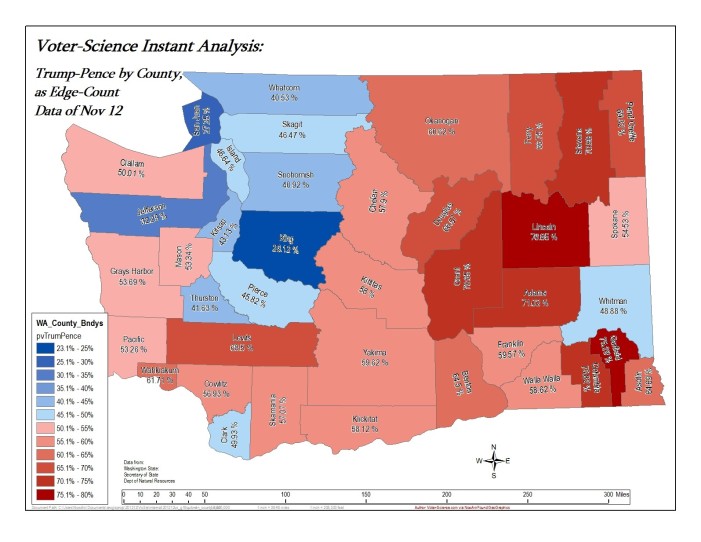 Although many Republicans are celebrating Trump’s presidential victory, it is important to recognize this Trump Effect and what it says about the electorate here in Washington state.  A deep divide persists among Washingtonians that represents a major challenge moving forward.  How do Republicans reconnect with Independent and more conservative Democrats who have at times walked across party lines to vote for Republican candidates.  There is fertile opportunity to engage with these voters outside of the traditional social justice spectrum.  The final part of our challenge is identifying the hot button issues that these voters care about that have alignment with conservative values.

One thought on “Measuring the Trump Effect (Updated 11/15)”